Letter to My Sister

We finally got home tonight from an astonishing road trip.

We left here last Tuesday and headed for Oberlin, Oh. for the ArtMetal Shindig. We went across Arkansas and met my friend Gregg who is an attorney in Little Rock. We wrestled over the lunch ticket. You've met Gregg but you were possibly six at the time. He was my road trip buddy in college and I rode with him to a LOT of out of town football games. He would call me and say "Skinney, we are leaving for the LA Tech game in twenty minutes, I'll pick you up in fifteen." I should tell you some day about the adventure we had when North Texas played Memphis State. Poor Lillian got her windshield smashed out. There was also mustard all over the car.

We went through Memphis and stopped at the visitor center on Riverside Drive. I know that your only connection to Memphis is that you were baptised there. I was so offended by the nasty rude behavior of the workers there. We've gone on any number of road trips over the years and we always stop at the visitor center when we've gone over the state line to get a free map and look at local attractions and pick up hotel coupons. I love Memphis, I've lived there several times in my life...as a small child, as a medium child and as an adult... I was born in West Memphis. Did you know that? I used to lie to people and say that I was born in West Memphis because my mother didn't make it across the bridge to Memphis. It's hard to admit that one was intentionally born in the Truckstop Capital of Mid America. There is a Grayhound racetrack there and a Pancho's that got busted for serving cat meat.

We stopped a little ways further on in Memphis to get gas. I begged Mark to let me stop and ask after Tops BBQ. We pulled off very near where we used to live in NE Memphis. Mark remarked on our way back that he was happy that the Summer Drive In was still in operation. He has a thing about drive in movies. That is another story (but we may go to the drive in tomorrow night for the 4th of July) We pulled off and I walked up to a woman working in front of the store. "Excuse me, Miss" I said. The woman ignored me, I might have as well been invisible. "Excuse me, Miss?" I asked again. She was facing me, but she had her Ipod going and she successfully ignored me. I went into the store to get a drink and I asked a woman that was nearby if she knew the territory. She admitted that she didn't know Memphis well. She and her family were coming from Dallas to their home in Nashville. She was at least pleasant and congenial. I spoke to her as we waited in line to check out and the clerk behind the counter heard my search for Top's and very earnestly gave me directions to the nearest location and smiled and told me that Top's was the BEST. I DID get my Top's BBQ and it was wonderful.

We went on to Nashville. I'd never been there before and was impressed. It is a very pretty city and very scenic. We spent the night there and got up the next day to head further north toward the Shindig.

I have lived in the MidSouth for some of my life and have seen billboards since I could read for Mammoth Caves. Mark told me that our route took us right by Mammoth Caves. I begged for a side trip to see something I've heard about all my life. It was gorgeous. It's in the middle of Kentucky and we wandered through hills and trees to find the site. There are at least a dozen different tours of varying difficulty. We got there and chose the next available tour which was "moderate." I don't know if you have ever been through caves but this one was impressive. It was not as dramatic as Carlsbad, but it was interesting and tight fitting and I worried at times about Mark getting his bulk through the passages. It was 500 steps down and 500 steps up. The tour guide TJ said to look forward because there were low hanging rocks and that they did NOT need new "names" that children should not hear. Seriously, several rocks were named "SHIT" and "Goddammit" and various other versions as our crowd came through.

We made it as far as Cincinnati that night. I'd never been to Ohio before. Mark's father was born just outside Cincinnati. It is a beautiful city. I don't know why I didn't think it would be pretty. In some ways it reminds me of Portland, Or. There are beautiful buildings built into the hillsides.

We made it to Oberlin the next day. We were kindly hosted by Nick Fairplay and Elizabeth Meadows. Their shop was amazing. Nick is a stone sculptor and is carving lions to go to the Utah State Capital. We had a blast. We got to play with metal and I got to use a cutting torch and it scared me. At least I didn't drop the torch.

There were little boys there and they ran Mark ragged. He did magic tricks and carried them on his shoulders and ran all over the place until he was ready to drop. They didn't want him to quit, he was the best new toy they'd ever had.

We stayed at the "Turquoise Dump" as Rich called it. It was very charming in a Bates Motel sort of way. It wasn't too far from the Shindig. The proprietor, Mr. Patel was a striking figure. He was intense about his concern for us being next to neighbors who paid for the "adult" channel for fear they would disturb us. I got the impression that Mr. Patel also rents by the hour and was pleased to have folks who actually stayed there for several days. We were next door to Rich and Alice so it was all good.

Marilyn gave us some lessons on foldforming. I had never done it but had some knowledge of the process. I made a very pretty leaf. She also gave us lessons in Viking Knitting which I had also never done and could not get my comprehension around the written instructions. It was much simpler than I expected and I picked it up pretty quickly.

Lynda and Elmer the blacksmiths from NC came and set up their forge. I did play at forging a piece of copper. It's amazing how soft the metal is when it is hot. They were wonderfully lovely people and we enjoyed them very much.

We left Oberlin and headed for South Dakota to see Rachael. We skirted around Chicago and headed up to Wisconsin. I'd never been there before and was very pleased at how pretty it was. We spent the night in Madison and seriously have never had to drive around in circles so many times to get to a hotel we could SEE. The road system is pretty interesting there. We left there and headed toward Minnesota and ended up in an hour long traffic jam right by the Great Wolf Lodge. Fortunately it wasn't too hot and Mark was being patient. 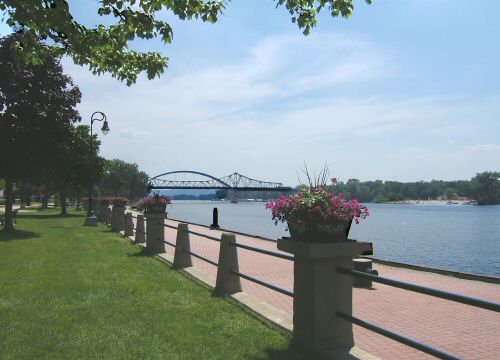 Crossing into Minnesota was amazing. I'd never seen the Mississippi River so close to it's source. It was even prettier a few miles up with a view of lots of little islands sticking up from a vast lagoon of water. The cliffs looking over the water were very steep and dramatic.

There were huge wind farms in Minnesota. We would come around the corner and the huge windmills would stretch as far as the eye could see. On our way across Arkansas we saw a truck carrying one of the blades. We didn't know what it was at the time, it looked a bit like an airplane wing, but not quite the right shape. We saw several more on the trip after we'd seen the wind farm. It's good to know that SOMEONE is trying to use sustainable resources.

It felt good to hit the South Dakota border, even though Rachael was at the far side. We miss her so much and it's good to see her. We soon recognized some familiar landmarks as we hauled ass across the state. The speed limit is 75, so of course Mark goes 80. He thought we'd get to Rapid City pretty late, but he drives faster than he realizes. We got there and were ready to crash and burn.

We got up finally the next day and took our girl to lunch at the Firehouse Brewing Company. Wednesday was fun because her fella was coming home and we were excited to meet him. We picked him up at the airport and took him out for continuing adventures. We went up to Deadwood and spent some time feeding money to slot machines. It was fun, I only spend as much as I'm willing to allot for entertainment purposes. I think Mark actually came out ahead a bit. He's so funny, if he gets a little ahead, he cashes in his ticket and puts the "overage" in his other pocket. He was positively jingling by the time we left. We decided to go over toward Hill City to the Prairie Berry Winery for a wine tasting. What's even more interesting is that we purchased a bottle of Red Ass Rhubarb wine. It's really pretty good. The names of the wines there are pretty funny. I tasted the 3rednecks and Lawrence Elk.

Sadly, we had to head south on Thursday. I was able to convince Mark to go see the Crazy Horse monument. It was impressive and there were so many people there. I was astonished at the crowds. The work itself is so grand in its scale and will be the largest sculpture ever when completed. We wandered all over the complex and then went in and watched a short film about the history of the project. When we came out, the temp had dropped 20 degrees and it was chilly. Mist poured through the gaps in the mountains. The way out included a drive through Custer State Park which wound in and out of the hills and then onto range land. I loved the road signs that said "Buffalo are dangerous" and "Wildlife at large." We did see quite a few buffalo and they are LARGE.

Western Nebraska has some charm. It is also scarily underpopulated. We'd go for miles without seeing anything but fields and power lines. Kansas was more of the same, but I loved the rolling hills. Oklahoma went by fast, we'd gone so many miles and getting close to home was a good feeling. We saw so many speed traps. It was evident that some folks were getting off to an early start for their 4th of July celebrations.

It's good to be home, but it's nice to have adventures!!
Posted by abhaille at 2:19 AM